A new simulator for change ringing on handbells

In mid-March 2020, the combined prospect of not being able to ring towerbells or handbells for some time and reading endless discussion on the shortcomings of video conferencing platforms on ringing forums started me thinking about what technology we could develop for online ringing.

Fortunately, my son Ted, who is a non-ringer but a brilliant software developer, had just moved back in with us at the start of lockdown while his kitchen was being refitted, and has been living and working from home with us since.

The concept was a simulator dedicated to change ringing on handbells that would allow ringing over the internet that could meet the performance norms set out by the Central Council in its Framework for Method Ringing. In other words, any peal length performances rung on it would be counted in the Council's Annual statistics as Peals on Simulators (something the Council voted to include in 2017). For handbells, this means that all bells must be controlled by human ringers ringing up and down strokes, and conversely none of the bells can be controlled by the computer and none of the ringers can be pressing computer keys to ring the bells.

Ten years ago, Ted had helped me develop Handbell Manager, an interface to simulators such as Abel and BelTower, that allowed USB connected motion controllers to sound the bells when they are swung up and down. I arranged to import suitable controllers, manufactured by a US Company, ActionXL, and sell them on at cost to UK ringers. Since then over 450 pairs of controllers have been acquired by ringers for use with Handbell Manager, which in the last couple of weeks has been adapted to work with both Ringing Room and Muster by Richard Johnston, Adrian Nash and Mike Pidd.

The new simulator is called Handbell Stadium, and one of its principle requirements is to overcome the lag experienced when trying to use video conferencing to ring over the internet. While Skype, Zoom, Teams etc are very good for their intended purpose, they prevent feedback from speaker to microphone by automatically muting those not talking, and suffer significant lag. Of course, this is not at all useful when you need to hear all of the bells at the same time, or when a bob is inadvertently silenced by the technology.

One way of overcoming the latency experienced in video conferencing is by getting each ringer's computer to send swing and strike signals (which are much smaller messages than video) from motion controllers to a server using a single direction messaging protocol called UDP. The server then forwards that information to the other ringers' computers, which converts the signals back to visuals and plays recorded handbell sounds at the strike point. Provided that the ringers have good internet connections, we found that the signals could be transmitted in less than 20 milliseconds, which should give reasonable results.

In order to hear the conductor and other ringers, a standard voice channel is required. The most suitable platform for this is Discord, a service specifically created for gamers and streamers to communicate in real time. Actually, any communications platform would be suitable for this aspect, but Discord has the ability to create dedicated channels for each band that are always on and available, yet prevent others joining once the designated band is complete. It’s a bit like being locked out by a peal band meeting to ring Major, when you are the ninth ringer to turn up!

The prototype version of Handbell Stadium has two-dimensional handbell graphics (using images borrowed from Abel) in a line that swing as the ringers move their controllers, and the first quarter peal successfully rung using this app was by four ringers in three locations.

First quarter on the platform. 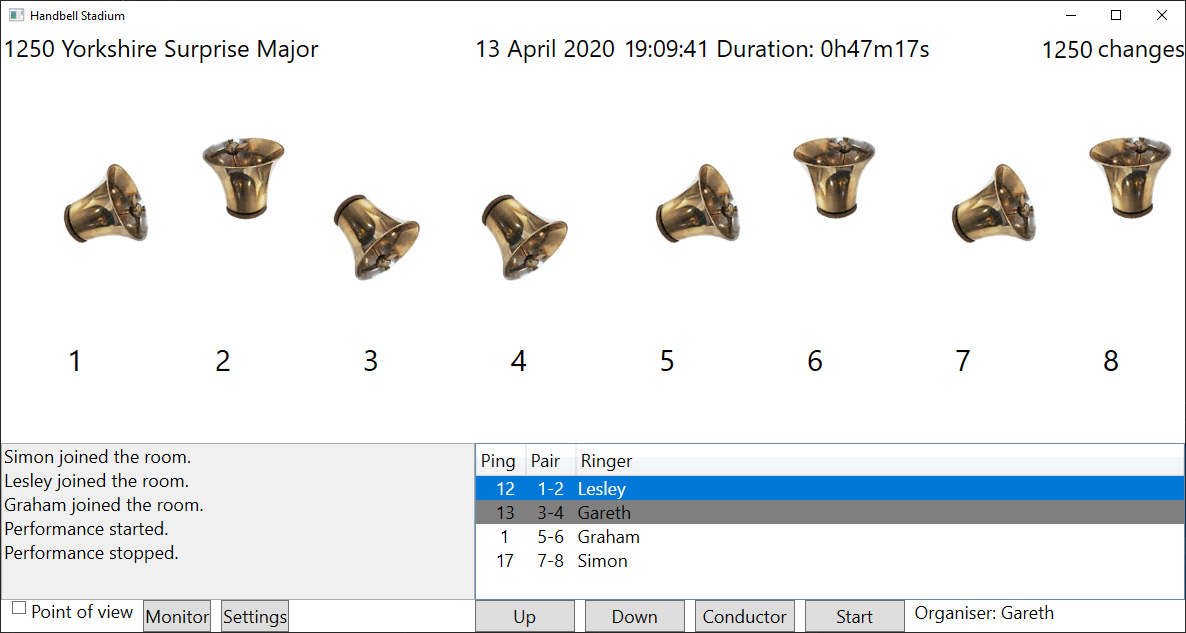 This worked pretty well, but for a handbell quarter, 47 minutes is quite slow. There may be a number of reasons for this: unfamiliarity and caution, insufficient visual cues, motion controller simulation not being sufficiently precise, and any lag caused by latency at any point in the system. Tricky problems to address, but with further investigation, experimentation, and practice on the platform, all of these factors may be improved.

Of particular interest is the graphics. I have never found 2D graphics for practising handbells very satisfactory. They do not give you the equivalent of ropesight on handbells as the perspective is all wrong. Having tried the Abel style graphics with the bells in a circle, I thought I would try the bells in a straight line so you can see exactly which bells are up and down at a glance. It does introduce the problem of your own pair being a mirror image, but I corrected this by providing a point-of-view option that hides your own bells and rotates the others to the correct position around you. Nevertheless, I really wanted something better.

Always keen to try out new technologies, Ted downloaded the development environment of a 3D gaming platform called Unity and started to develop a full 3D model of a swinging handbell complete with swinging clapper. These were then programmatically replicated and placed in a circle on chairs in a 3D room. Your perspective is a camera view, and the camera can be moved anywhere within the room. The bells can be controlled by the ringers swinging motion controllers to simulate the up/down movement of real handbells in the same way as the 2D model, or in practice mode the computer can ring the remaining bells while you ring a pair. Of course, with Ted’s help, I then had to learn how to use and program for it too, as well as get to grips with Euler angles and quaternions! 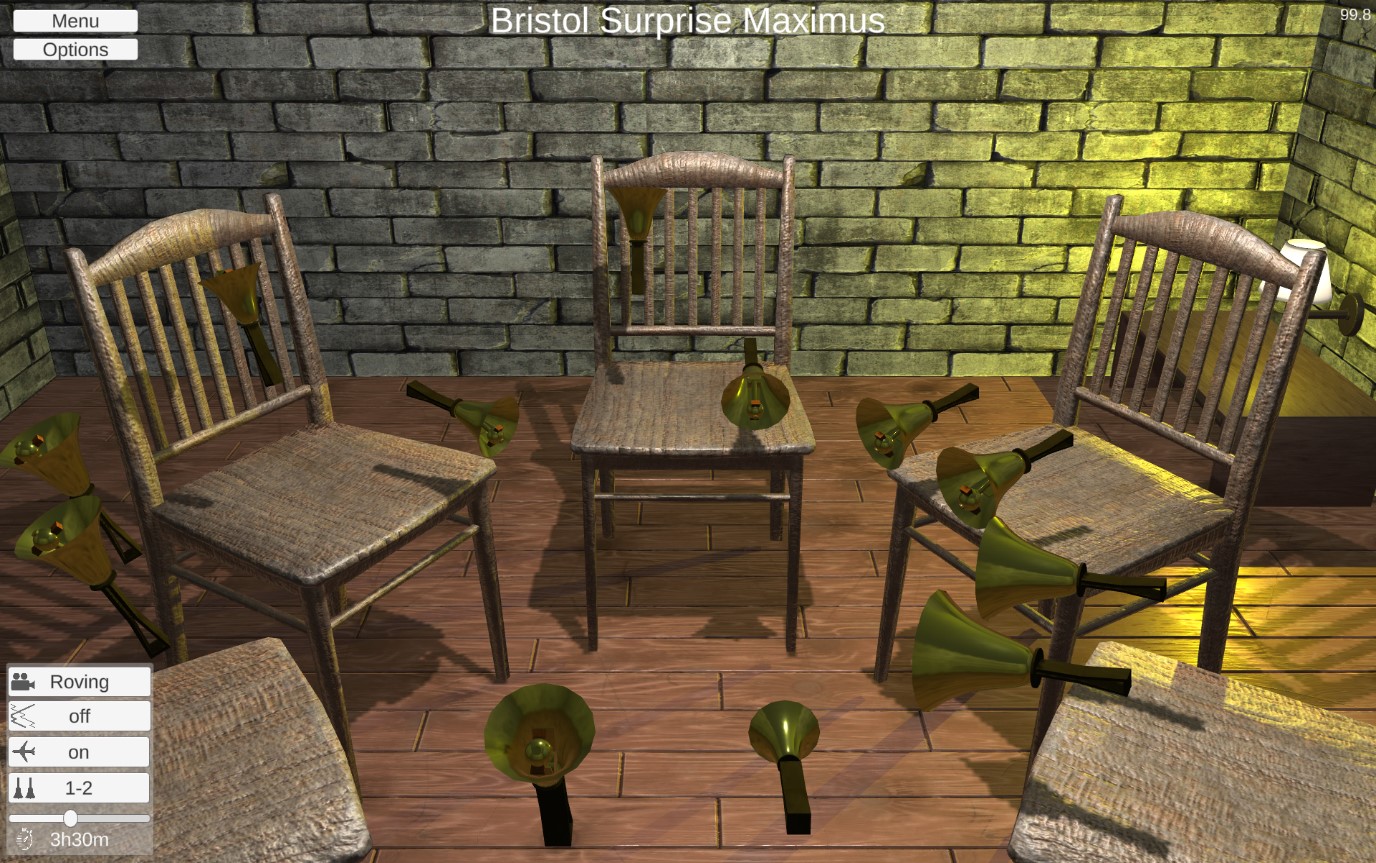 Three-dimensional ringing in the basement

The "ropesight" effect you get with the 3D model is incredible! Suddenly, it is just like sitting in a room with other handbell ringers, and picking out your place among the other bells is just the same as in reality. A project that started purely because of circumstances has turned into something that could revolutionise handbell practice and performance well after we return to some form of normality. You can see the 3D graphics prototype in action below.